A modified Try Mode Map for Heroes of the Storm to create a better experience with enhanced functionalities.

◁ Back to Home

In order for the tools to work, some specific environment configurations must be done.

After installed the libraries and application above, in this directory, run npm install.

All the settings are stored in the .env file in the root of the project directory.

Before using any tools, rename .env.example into .env (remove the .example at the end) and modify the configuration to fit your need.

This tool uses dotenv to load the configs into Environment Variables (process.env). The settings are key=value pairs with strings having double quote.

The current values required are:

Note: Tools that requires extraction from the Heroes of the Storm game file will take a while.

This tool will create a Symbolic Link to the Heroes of the Storm installation folder, which will "mirror" the directory, such that you can continue to edit the files in the directory but will also take effect in the Heroes actual try mode map.

This command should not need to use more than once if it completed successfully.

*.s2ma files are the generated libs for Heroes of the Storm. But most importantly it will also contain actual map files as well.

The tool will find all of the *.s2ma files and output them to s2ma/ directory.

To view or extract them, I suggest uses MPQ Editor.

This tools will search through most the abilities (Q, W, E, R, which are <CAbil*>) and map them to a a corresponding <CBehaviorAbility>. With the id having prefixed "M".

The reason for this is you can add any abilities to any heroes freely (which will appear on the items bar, the top bar where active buttons like ice block, cleanse placed)

To do so, just simply add the behavior to the selected units (e.g using the chat command adb MZeratulCleave) 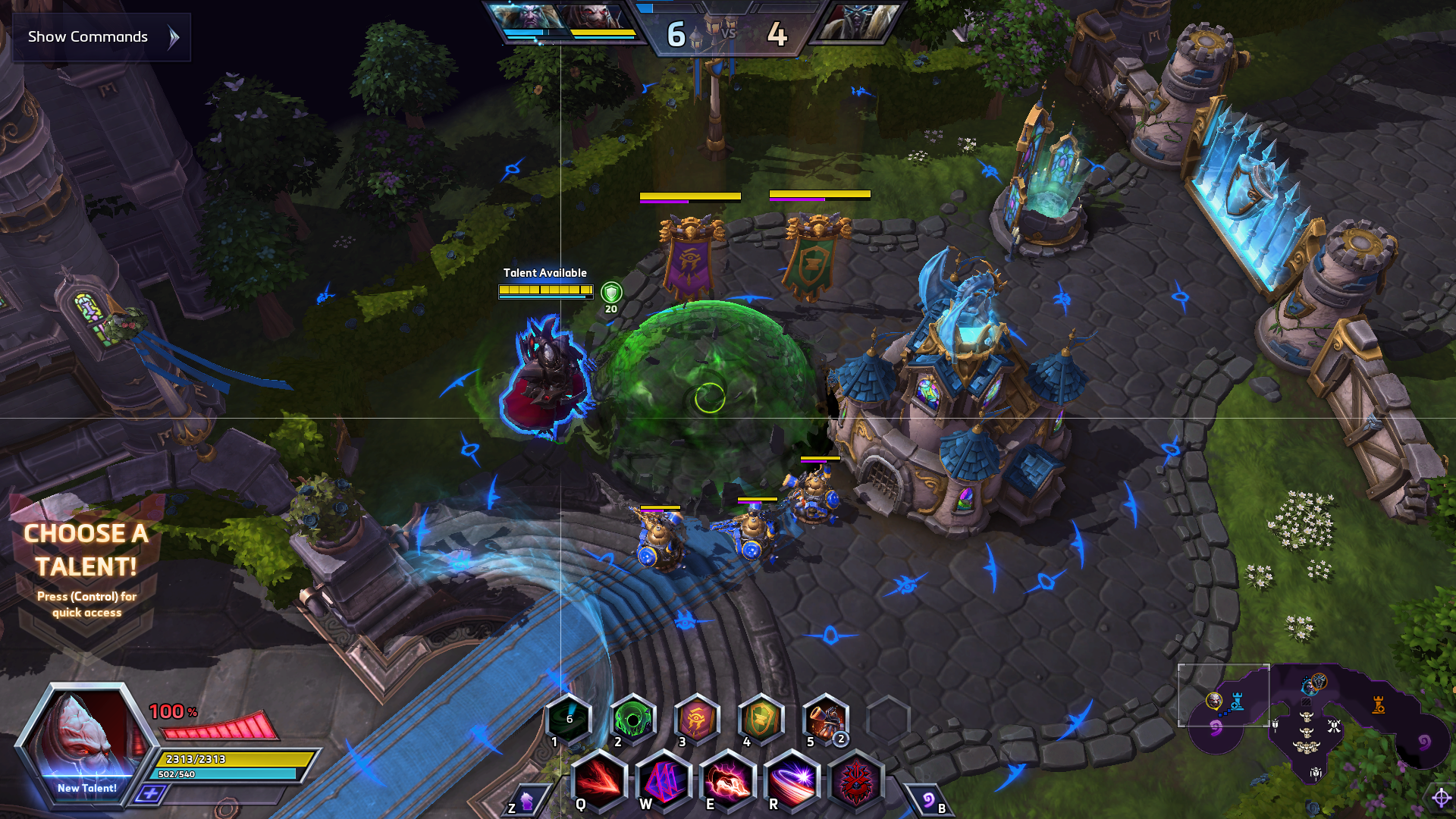 This tool will search though all the <CBehaviorBuff> and map it to a toggleable hotkey button, similar to how Ice Block / Spell Shield works.

Note: This will also respect the game settings, e.g Stuns and Silences will disable hotkey bars. Therefore it is not recommended to use MBPermaStun (Behavior Buff: PermaStun) or MBPermaSilence (Behavior Buff: PermaSilence) since you cannot active again to cancel it. You will need to respawn / remove the behavior (not the ability but actual behavior buff) if you would like to regain control.

This tool will search though all the <CModel> and map it to a <CUnit>, which allows to be controlled on the map.

This will generate a unit with the prefixed UN. For instance, the model RetreatPing (White Flag retreat ping model) will have a unit UNRetreatPing, which you can summon this unit using tools such as summon, with the command of summon UNRetreatPing.

Use npm run watch:xml for automatically run the command above when required files were changed

Note: It will ignore any files that does not end with .xml (case insensitive) and does not validate whether the XML file is valid (syntax error, etc). TODO: Also validate XML syntax.

Important: Please note that this feature is disabled by default in the game (the tool can still generate the mimic libs). This is due to it is incompatible with some maps and the feature it provides does not have sufficient reason for it to enable by default (it cause more harm from what I can tell). Due to it was disabled via .galaxy modification, it is not possible to toggle this option with a chat command. If you would like to enable this feature, please manually edit the file:

Modify the following lines by removing the leading //:

The Mimic Libs will be taken from heroesdata.stormmod/base.stormmod/TriggerLibs.

Currently will mimic (AI and Native Libs is excluded):

Mimic Libraries are identical to internal trigger libs (Created by Blizzard). However, due to some restrictions, some functionalities cannot be easily used (for example it will detect whether it is a development build or production build, to prevent normal users accessing the commands.)

TODO: Found out what cause LibAIAI.galaxy to crash the map when mimic-ed. Currently exclude that lib from mimicking.

Hence, I have create a mimic lib that is identical to internal libs, but modified a few things automatically.

Since there are two ways that Blizzard detect whether does the game are in dev mode (maybe by different Blizzard Staff), some of the triggers have them both validated:

This is most commonly used, however it can be easily bypass it, as libCore_gv_dEBUGDebuggingEnabled is just a variable that can be overwritten, which already done in libDEBUG.galaxy.

However, another checking method on some triggers can not bypass:

Because this c_gameCheatCategoryDevelopment is a constant that was pre-defined (which cannot be changed and will crash if you "forcefully" do so).

Hence, all the mimic internal libs that checks for GameCheatsEnabled(c_gameCheatCategoryDevelopment) and libCore_gv_dEBUGDebuggingEnabled will be replaced to true.

Since those code are for debug purpose only, if you have played around SC2 Maps, you should come around the TriggerDebugOutput function. This is internally, which looks something like this: 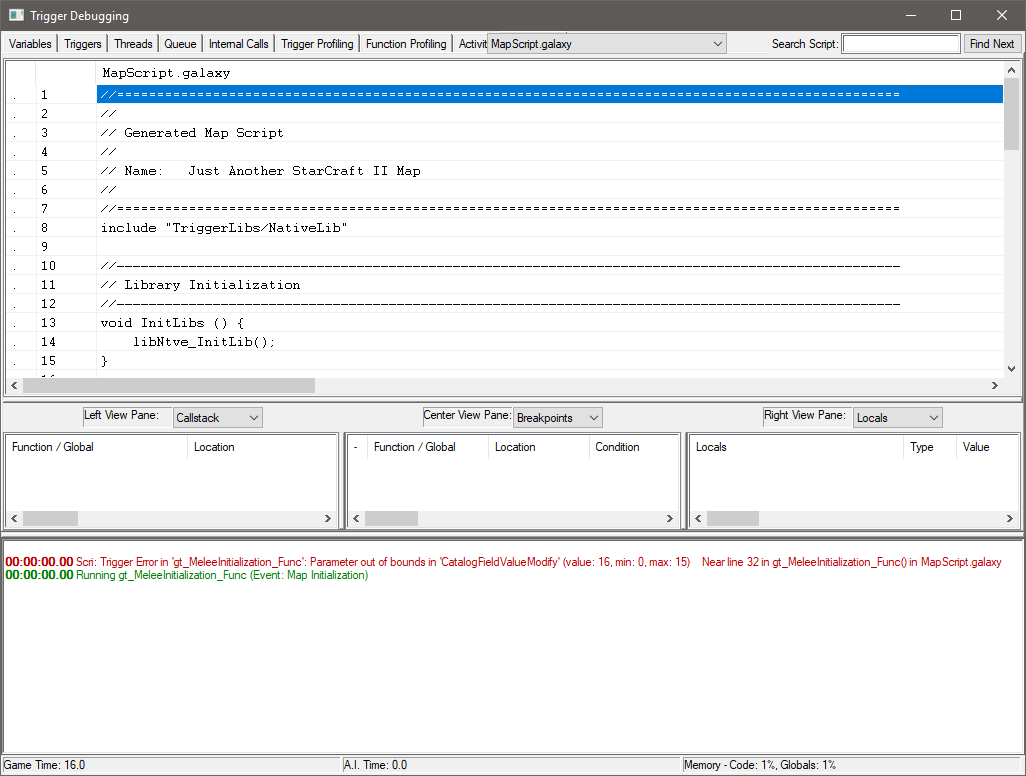 However, I cannot find a way to get the debug window up despite manually calling the debug window out. This tool is extremely useful for debugging if Heroes can call it out. Well, unfortunately.

Those messages still carry out important information about the current state of the trigger call so I changed the TriggerDebugOutput inside the mimic internal libs to a custom function, that will output the message to c_messageAreaSubtitle instead, like how all the chat commands outputs.

Note: This feature is disabled by default. Meaning it will not showing any messages. This is to prevent the bombardment from SupportLib's logging messages (like 00:00|Player 1|ExperienceContribution 1234). If you would like to toggle this functionality, you can use the chat command tmtdo or togglemimictriggerdebugoutput to do so.

In order to prevent a chat command have conflict with the original lib (for example both internal and mimic lib listen for the same chat command and execute the same function), I have added a m prefix to all chat commands, regardless what characters do they start with.

Use npm run watch:libraries for automatically run the command above when required files were changed.

A command to automatically remove all //_heroes_replace_// string in the Modules folder. This allows for less human errors.

After exported and saved the galaxy file, run this command and enter Try mode to test it out.

This does not need to do a manual search/replace in Galaxy Editor.

Use npm run watch:usagedoc for automatically run the command above when required files were changed.